Delaying making up Ramadaan fasts until the next Ramadaan begins

Delaying making up Ramadaan fasts until the next Ramadaan begins

I did not fast some days in Ramadaan because of my period. This happened a few years ago, and I have not fasted these days until now. What do I have to do?.

Praise be to Allaah.

The imams are agreed that whoever does not fast some days of Ramadaan has to make up those days before the next Ramadaan comes.

They quoted as evidence for that the hadeeth narrated by al-Bukhaari (1950) and Muslim (1146) from ‘Aa’ishah (may Allaah be pleased with her) who said: “I used to have fasts that I still owed from Ramadaan, and I could not make them up until Sha’baan, and that was because of the position of the Messenger of Allaah (peace and blessings of Allaah be upon him) [as a husband].”

It may be understood from her keenness to fast them in Sha’baan that it is not permissible to delay making up fasts until the next Ramadaan begins.

If a person delays making up fasts until Ramadaan begins, one of the following two scenarios must apply.

1 – The delay is for a reason, such as being sick and the sickness lasting until the following Ramadaan begins. There is no sin on a person for delaying in this case, because he has an excuse, and he only has to make up the days missed. So he should make up the number of days that he did not fast.

2 – There is no reason for the delay, such as when a person was able to make up the fasts but he did not do so before the following Ramadaan began.

Maalik, al-Shaafa’i and Ahmad said that he must feed a poor person, and they quoted as evidence for that the reports narrated from some of the Sahaabah such as Abu Hurayrah and Ibn ‘Abbaas (may Allaah be pleased with them).

Imam Abu Haneefah (may Allaah have mercy on him) was of the view that he does not have to feed a poor person as well as making up the fasts.

He quoted as evidence the fact that Allaah commands the one who does not fast in Ramadaan only to make up the missed fasts, and He did not mention feeding a poor person. Allaah says (interpretation of the meaning):

{“and whoever is ill or on a journey, the same number [of days which one did not observe Sawm (fasts) must be made up] from other days”}

This second view was also favoured by Imam al-Bukhaari (may Allaah have mercy on him). He said in his Saheeh:

Ibraaheem (i.e., al-Nakha’i) said: If a person neglects (to make up missed fasts) until the next Ramadaan comes, he should fast the missed days of both months. But he did not think that he has to feed a poor person. There was also a mursal report from Abu Hurayrah and Ibn ‘Abbaas which says that he should also feed a poor person. Then al-Bukhaari said: But Allaah does not mention feeding a poor person, rather He says (interpretation of the meaning):

Shaykh Ibn ‘Uthaymeen (may Allaah have mercy on him) said, when noting that it is not obligatory to feed a poor person:

With regard to the words of the Sahaabah, their use as evidence is subject to further discussion if it goes against the apparent meaning of the Qur’aan. In this case, saying that it is obligatory to feed a poor person goes against the apparent meaning of the Qur’aan, because Allaah only enjoined making up the same number from other days, and He did not mention more than that. Based on this, we should not oblige the slaves of Allaah to do any more than they need to fulfil their duty. But what was narrated from Ibn ‘Abbaas and Abu Hurayrah may be interpreted as referring to what is mustahabb, not what is obligatory. The correct view with regard to this issue is that a person does not have to do anything more than making up the missed fasts, but he is sinning if he delays doing so.

Based on this, then what is obligatory is to make up the fasts only, but if a person wants to be on the safe side and feed one poor person for each day missed, then that is good.

The woman who asked this question – if she delayed making up the fasts with no excuse, has to repent to Allaah and resolve not to repeat this mistake in the future.

And Allaah is the One Whom we ask to help us to do that which He loves and which pleases Him.

Delaying Sahour is a very merciful Sunnah, it gives the Muslim strength for fasting and the ability to tolerate the burden of thirst and hunger. Zaid bin Thabit said; "We took Sahur with the Messenger of Allah then we went to pray." I asked the Prophet (ﷺ):"How ... 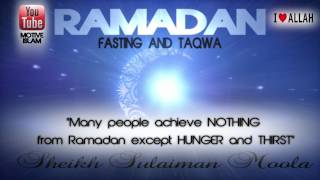 Fasting is primarily between the person and God, as no one can be sure that any person is actually fasting. ... more
#Allah
2
0
20,048
Share

The Prophet In Ramadan

Ramadan is a month of contemplating the Grace and Bounty of God Almighty, of returning to our Guardian Lord in repentance. ... more
#Ramadan
1
0
11,392
Share

Introduction to Ramadan, the Islamic month of fasting. Its Name and Origin, Prayer & reading of The Qur'an, Events of Ramadan & medical benefits of Fasting. ... more
#Ramadan
7
2
39,444
Share

When making up missed fasts, it is essential to form the intention the night before, as is required in the case of the original fast

Praise be to Allah. Firstly:  It is not valid to change the intention of observing the voluntary fast that one has completed in order to make it a fast to make up for a day of Ramadan which one did not fast, because when making up missed fasts, it is essential to form the intention ... Continue Reading
#fast
0
0
7,784
Share
Articles Since 2012-12-23

The Inner Secrets of Fasting

Indeed, the fast is only virtuous due to two significant concepts. Firstly, it is a secret and hidden action thus, no one from the creation is able to see it. Therefore showing off cannot enter into it. Secondly, it is a means of subjugating the enemies of Allah. This is because the road that the enemies (of Allah) embark upon (in order to misguide the Son of Adam) is that of desires.. ... more
#volunteer
5
1
7,015
Share
Articles Since 2012-12-23

Ramadan: The Month of Deeds

“On the first night of Ramadan, the devils and rebellious jinn are bound in chains; the gates of hell are closed, none of them remains open and the gates of Paradise are opened until not a single gate remains closed.” ... more
#Quran
1
0
6,541
Share
Articles Since 2012-12-23

Getting closer to Allah in Ramadan

I urge you, my brothers and sisters, do not miss any day of fasting and do not miss any moment of the blessed month of Ramadan. This is a very precious time and Allah will give us many benefits if we use it in the proper way. ... more
#Ramadan
5
2
23,860
Share
Show more