Imam Muslim (Muslim ibn al-Hajjaj) was born in 202 AH in Naysabur (817/818CE) and died in 261AH (874/875CE)also in Naysabur. He traveled widely to gather his collection of ahadith (plural of Hadith), including to Iraq, Saudi Arabia, Syria and Egypt. Out of 300,000 hadith which he evaluated, approximately 4,000 were extracted for inclusion into his collection based on stringent acceptance criteria. Each report in his collection was checked and the veracity of the chain of reporters was painstakingly established. Sunni Muslims consider it the second most authentic Hadith collection, after Sahih Bukhari. However, it is important to realize that Imam Muslim never claimed to collect all authentic traditions as his goal was to collect only traditions that all Muslims should agree on about accuracy. 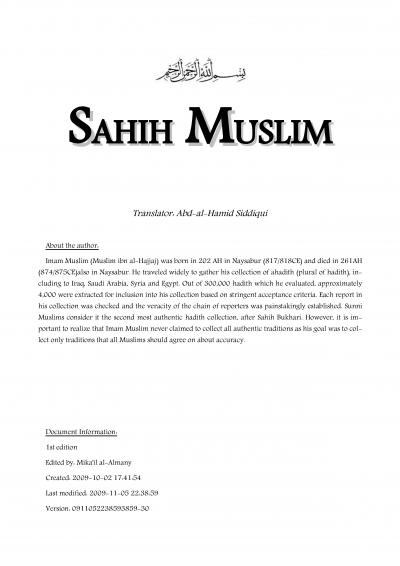 The authors of the Six Books

The Desirability of Prostrating out of Gratitude

Attending the funeral of a non-Muslim relative