Few thinkers have had such an influence on the contemporary Islamic thought as ash-shaheed Sayyid Qutb. Since his execution in 1964 in Cairo, his death became the perfect illustration of one of the processes through which a human being becomes part of the revolutionary movement aimed at changing the world and bringing in a new ethical moral order based on freedom, brotherhood, and justice for all. Islam stands for change. It seeks to change the individual and the society. This change covers every aspect of human life: form personal morality to business economics and politics. It is only natural that Islam should be fought by those who want to keep the status quo. This is the way it has always been throughout history: Adam to Nuh, Ibrahrim, Musa, Isa, and Muahmmad (peace be upon them). It will happen to anyone who wants to stand up and proclaim the true message of Islam to the world. 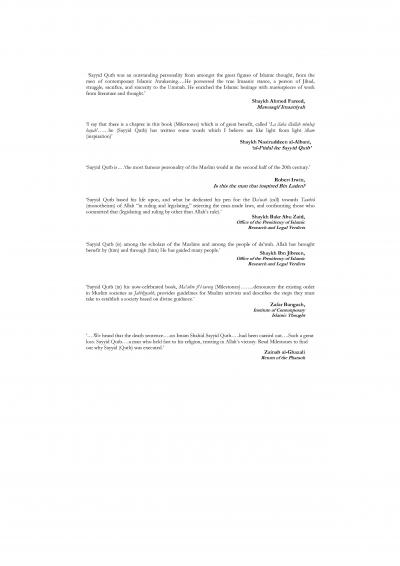 Gaza between blood and torn-off limbs

A New Way to Treat Women

Mohammad Qutb – Death of an Icon